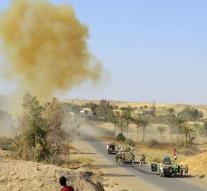 baghdad - At least seventeen people were killed Saturday in Baghdad by a suicide bomber blew himself up. More than fifty others were injured.

The explosion took place in a tent, where a gathering of Shiite Muslims was underway. The tent stood on a crowded market in the district of al-Shaab in northern Baghdad. The Muslims were together because of Ashoura, a commemoration of the death of Muhammad's grandson Hussein.