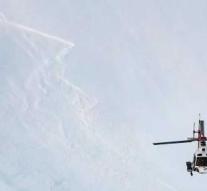 paris - An avalanche in the French Pyrenees has cost the lives of two Spanish skiers. One victim died on the spot, a second person later died in the hospital in Toulouse.

The avalanche dragged a total of five Spaniards in the vicinity of the Bielsa tunnel. Three skiers could free themselves from the snow. They warned the emergency services, reports French media.

It is the second time in a short time that France is startled by a deadly avalanche. For example, four more people were killed in the French Alps on Friday. Their guide escaped unharmed. He has been interrogated by the police.