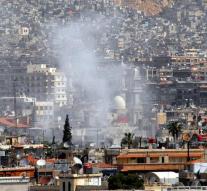 There were certainly three explosions in the central Al-Midan district: one of a car bomb and two by suicide terrorists. The state press agency Sana spoke of a 'terrorist explosion.' 'The Russian press office RIA reported about fifteen dead and reported that a police station was the target.

It is still unknown who is responsible for attacks.

The state press agency Sana spoke of "terrorist" acts but the responsibility has not yet been claimed. Damascus attacks are not the order of the day, but if something happens the consequences are usually serious. In July, twenty people arrived through a car bomb. In March, several attacks on shiite targets were attained, with forty and 74 deaths, respectively. Those were then claimed by IS and an al Qaeda-related group.