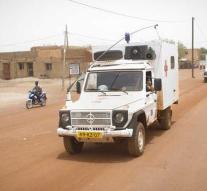 bamako - Certainly two blue helmets were killed in Mali by attacking a UN base at Adjelhoc, in the northeastern Kidal region. Ten others were injured. Nothing has yet been published about the nationality of the victims.

Attackers attacked the UN soldiers on Thursday evening with mortar grenades, announced UN mission Minusma. The safety measures around the base have been tightened. It is still unclear who is responsible for the attack.

Minusma has been active in the North African country since 2013. Since then, blue helmets have repeatedly been killed. At the end of February, four UN soldiers were killed when an explosive exploded near their vehicle. They were from Bangladesh.