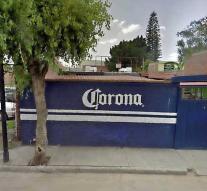 salamanca - In an attack by armed men at a nightclub in Mexico, at least ten people were killed. The attack was just after midnight on a nightclub in the city of Salamanca.

Witnesses were alarmed when they heard shots from nightclub La Playa. Upon arrival of the emergency services, the bodies of at least ten people were discovered. Four wounded were taken to the hospital.