Home / World / Kill by attack at mosque in Kabul 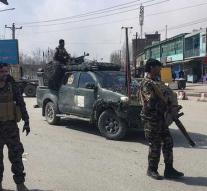 kabul - Due to a suicide attack at a mosque in the Afghan capital Kabul, at least seven people were killed on Friday. On the square in front of the al-Sara mosque, hundreds of people had gathered for a memorial service to an important Shia leader.

The terrorist blew himself up a few hundred meters from the meeting after security people had been watching him. The responsibility for the attack has not been claimed.

In October, more than seventy people died in an attack in the same neighborhood.