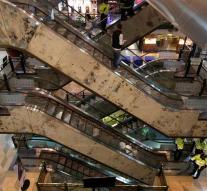 bogota - At a stop in a shopping center in the Colombian capital Bogotá, three women died and injured nine. An explosive was placed in a women's toilet in a popular mall. There were about 500 people in the area at the time of the explosion Saturday night local time.

All twelve victims were women. One of the deadly victims was a Frenchman.

Mayor Enrique Penãlosa called the explosion on Twitter a 'terrible terrorist attack'. He announced an investigation into the attack.

The background of the explosion is still unclear. Initially, reference was made to the left-wing guerrilla of the ELN Movement, which also commenced an attack in Bogotá in February. However, ELN rejected the attack against citizens. The authorities announced that the so-called Gulf Clan, a group of former right-wing paramilitaries, threatened with attacks.