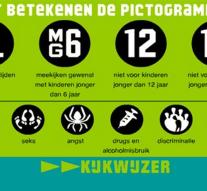 - The CDA wants audiovisual products on all media platforms are equipped icoons to warn parents. They can see better if the content of television programs, films, video on demand, apps and games can be harmful to their children.

Such a system already exists : the NICAM Kijkwijzer of the institute. But Christian Democrat parliamentarian Pieter Heerma want this classification is extended and also mandatory for all (commercial) TV stations and companies that broadcast in the Netherlands or to offer their product.

He will on Monday propose to State Sander Dekker (Media), on Monday defended its media budget. According Heermabrug many parents need more short information in advance. " The Dutch law is fifteen years old and needs to be renewed, "he says. Norway is already adjusted.

The VVD wants the Dutch Public Broadcasting (NPO) is no longer focused on old-fashioned television, especially when it comes to young people. According VVD MP Ton Elias look that just via the app and in the replay. Those numbers, according to him should be counted to determine whether something makes sense or not.

" wake up, that fine, beautiful old TV which was put weekly in the furniture polish, exists for young people anymore. The goal, young viewers to the NPO must come first, not the means, the unit ", said Elias. And if young people really do not see, then, what the VVD concerns NPO3 better be shut down or be destined for regional television.