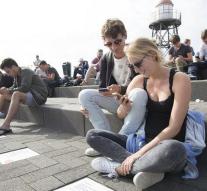 - Concentrated Pokémonjagers look at their phone. Since the craze surrounding Pokemon Go has broken them up the stairs to the Kijkduin boulevard repossessed, sometimes by the hundreds. This is the favorable location of the Pokéstops' in the virtual Pokémon world, and the animals that come to the many people who are together.

As far as D66 Hague, Kijkduin is also the official Pokémon capital of the Netherlands.,, This summer called 'Pokéduin. 'The local middle class is doing good business by the huge groups 'trainers', who early morning until late at night hanging out on the boardwalk. D66 party leader Rachid Guernaoui has come into his pleased with all those people from far and near to The Hague to catch the beasts. 'It's also nice every night. '

He wants to make it easier for mobile catering for the Pokémon players ice creams, food and drink to sell on the boulevard. Guernaoui also proposes to replace a couple Miffy orientation poles on the beach by Pokémon. Responsible alderman Boudewijn Revis sees something in that plan.,, There is room for a few Pokemon, 'the VVD. What Pokemon exactly, and why the game is so popular?