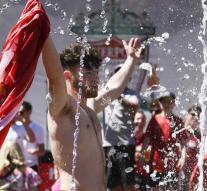 kiev - Mistakes, masked hooligans, chaos at the airport, crying fans. The organization of the Champions League final in Kiev is so lousy that UEFA has announced its apologies and wants to prevent repetition, at all costs.

It was already on Thursday. A group of twenty masked men stormed into the Rooster Grill restaurant, where Liverpool fans dined around 8.30 pm, then beat everything short and small.

'We were eating quietly, fully engaged with ourselves. Then they suddenly came to us like a pack of dogs. I did not come here, 'says a disappointed Liverpool fan, a few days before the grand final Liverpool- Real Madrid.

Even today it was hit again in the city, although the 'hooligan' on the video below is less successful. Earlier it turned out that, due to a lack of space, three flights with Liverpool fans to Kiev were canceled.