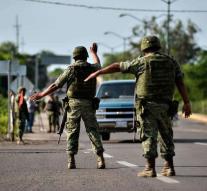 - Armed men have six or seven suspected members of the notorious Sinaloa drug cartel kidnapped from a restaurant in the popular Mexican tourist resort of Puerto Vallarta, authorities say. Nine women who were in their company, were left in the restaurant. The Sinaloa cartel headed by Joaquin 'Chapo' Guzman, until he was arrested in January.

The tourist town in the Pacific is also the area of ​​the Jalisco New Generation Cartel. The drug cartel is becoming more powerful.