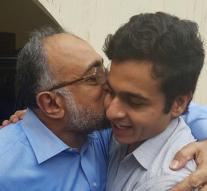 - Pakistani troops have freed Tuesday by Islamic extremists kidnapped the son of a member of the Supreme Court of Sindh province. Awais Shah was handcuffed and gagged found in a burqa in the backseat of a car on the edge of South Waziristan. The kidnappers were possible with him on his way to Afghanistan, said an army spokesman.

Three,, terrorists '' were slain during the operation, said the spokesman, Gen. Asim Bajwa. They were named by him as a splinter group of the Pakistani Taliban.

Awais Shah was on June 21 for a supermarket in Karachi, 885 kilometers further south, kidnapped. The police suspected that the kidnappers wanted to use him to force the release of imprisoned extremists.