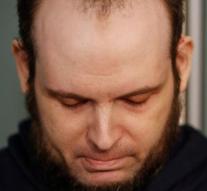 toronto - Joshua Boyle, who was kidnapped in 2012 with his wife during backpacking in Afghanistan, published a booklet about the horrors they should have sustained. Boyle, his wife Caitlan Coleman and their three children were recently released by the Pakistani army from the hands of terrorists. They have now arrived safely in Canada.

The couple disappeared five years ago while backpacking in Afghanistan. They probably belonged to the so-called Haqqani network, which has ties with the Taliban. Coleman was pregnant at that moment. The children were all born in captivity.