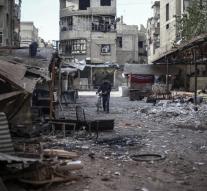 The Russian Deputy Foreign Minister Gennady Gatilov minister said in Moscow that Russia bet on an increase in the fight against terrorism in Syria. Gatilov met in the Swiss city among others his colleague Anne Patterson, the US top diplomat for the Middle East.

The situation in Syria was in October and November already led to high consultation in Vienna, where countries such as Iran, Saudi Arabia and Turkey, and representatives of the European Union were present. In January, following in Geneva under UN auspices a dialogue between the Syrian government and rebels in the country. Talks Friday are also a preparation for it.

That has not been done though consultations on Syria. Still to come this month, probably in New York, the question ' Viennese ' parties reconvened.