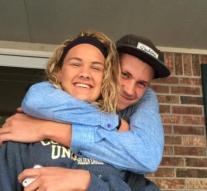 clearwater - A pair of married couples just married a day after their wedding party was killed deadly.

19-year-old Austin Wesson died on the spot, his newlyweds Rebekah Bouma shortly thereafter in the hospital. The couple shot by still unknown cause in Clearwater Texas off the road and crashed against a tree. The two had the word-word given in Wichita the day before the accident. They only had four months together.

John Bouma, the father of Rebekah, tells in the Wichita Eagle that Austin had asked for his daughter's hand via Facetime. 'He was a very serious and respectful young man.'

Surf teacher Austin Wesson grew up in South Africa. The couple met a couple of months ago while they were each traveling separately.

The newly-married couple wanted to move to Grand Rapids, Michigan, to marry there after marriage.