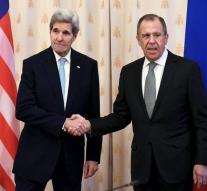 moscow - John Kerry wants to cooperate with Russia to find a solution to the conflict in Syria. It said US Secretary of State at his meeting in Moscow with his Russian counterpart Sergei Lavrov. The potential partnership is also on the agenda when the ministers this week in New York are discussing the situation in Syria.

,null, Russia despite differences for us an important partner. We must work together to resolve the situation in Syria, '' Kerry said. He will later on his second visit this year to Russia also President Vladimir Putin.According to Russian media, Lavrov also urged on the Americans to exert influence on the Ukrainian leadership in Kiev to end the conflict in the east of Ukraine.
NEW