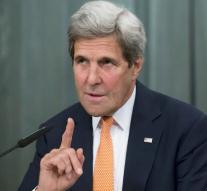 - US Secretary of State John Kerry will later this month visit to Turkey. He becomes the first Western minister to the country calling since the failed coup of July 15th.

Turkish Foreign Minister Mevlüt Cavusoglu announced on Friday that Kerry is going to Turkey. The government in Ankara has previously complained that no Western leader has visited since the attempted coup by way of support. Minister Recep Tayyip Erdogan Wednesday have declared that the West is in his opinion had rallied to the side of the coup plotters.

Kerry is expected to August 24 in Turkey.