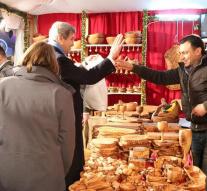 hamburg - The wife of US Secretary of State John Kerry can expect a few wooden kegs with oil. The minister seized Wednesday his presence at the summit of the OSCE in Hamburg to visit the local Christmas market on the Jungfernstieg and was doing some shopping.

Kerry wandered relax with security guards on the eye along the stalls and stopped at a vendor of Mediterranean olive oil. There he purchased four small and two larger kegs with oil. He did away with his credit card and also spoke a little German, witnesses said.

Immediately thereafter disappeared the company in cars towards the opening of the Ministerial Council of the Organization for Security and Co-operation in Europe (OSCE).

Whether the German authorities were happy with the relaxed trip of US Secretary remains to be seen because they are these days on edge. Around the summit of the OSCE because of the safety of the prominent guests grand total of 10 500 active police officers. According to German media, that amounts to more than two hundred police officers per minister.