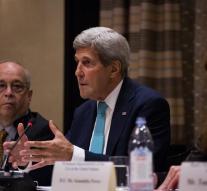 - "Finally reach trucks with humanitarian aid to the Syrian cities where the army and rebels opposed. US Secretary of State John Kerry said Monday that eight or more besieged cities to be supplied now."

"Kerry said in New York at the United Nations, just before he started talks with Tunisian President Beji Caid Essebi. After a question the state of the cease-fire in Syria, he replied:,, It went pretty well last night. The trucks today reach eight or more locations. Let's see how it goes. \""