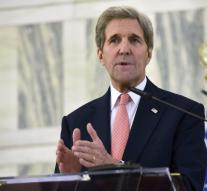 moscow - Russian Foreign Minister Sergei Lavrov and his US counterpart John Kerry there by telephone become agree that there need to quickly get a joint list with Islamist terrorist groups. This was reported by the Russian news agency RIA on the authority of the Ministry of Foreign Affairs in Moscow.

The two spoke to each other on the eve of a visit by Kerry to the Russian capital. They agreed that previous decisions on Syria must first be carried out before a new meeting on the crisis in that country is invested.