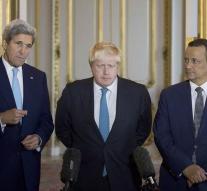 london - The United States and Britain have called on Sunday to establish a ceasefire in Yemen as soon as possible. Government forces, backed by Saudi Arabia and Iranian-backed Houthis are still fighting.

There are now regretted thousands of civilian casualties. For example, last week were still 140 people slain by a rocket attack on a Houthi funeral in the capital Sanaa.

US Secretary of State John Kerry said that if the parties can arrive at a cease-fire, the UN special envoy Ismail Ould Cheikh Ahmed then with the parties to go to the negotiating table to reach a peace resolution.