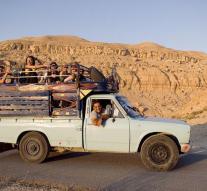 amman - Jordanian security forces on Tuesday embroiled again got into firefights with unknown gunmen in Kerak. This was done according to sources within the security forces after a raid on a house on the city's outskirts.

The town was last weekend the scene of fighting between security forces and extremists who certainly were killing nine people. The Jordanian authorities then launched a manhunt for accomplices of the perpetrators.