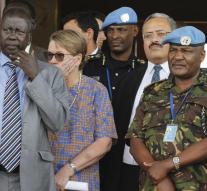 - Kenya pulls his troops back from the UN peacekeeping mission in South Sudan (UNMISS). The government in Nairobi has announced that Wednesday. Kenya is furious about the decision by the United Nations to dismiss the Kenyan commander of the peacekeeping force.

The Kenyan commander was replaced as UN soldiers in southern Sudan must protect civilians not acted appropriately when violence erupted in the capital Juba in July this year. The Dutch Major General Patrick Cammaert off duty, who has studied violence in Juba on behalf of the United Nations, ruled Tuesday that the UN soldiers themselves 'risk-averse' had drawn up. There was a complete lack of leadership, the peacekeepers were badly prepared and cooperation between the various components of the mission was flawed.

In three days arrived according to conservative estimates, 73 people were killed by the outbreak of violence in Juba. Some of the victims fell on UN grounds, where citizens sought safety properly. On one of those areas, a total of 180 sites hit by bullets, mortar shells and other weaponry.

The peacekeeping force for South Sudan is composed of approximately 13 000 troops. The UN mission was formed in 2011. South Sudan became independent from Sudan when.

It is not known how many Kenyan soldiers are currently part of the force, according to the BBC. Earlier, there were about a thousand. Further supply including China, India and Nepal military for UNMISS.