Home / World / 'Keep an eye on all slaughterhouses' 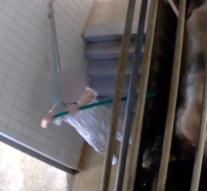 izegem - Now that shocking camera images of malady have emerged in a Belgian slaughterhouse, it calls for permanent camera surveillance in the seventeen slaughterhouses in Flanders.

For this, the Greens plead in the Flemish Parliament. 'We want to ensure that the business of all slaughterhouses can be monitored 24/24,' said MP Bart Caron. 'The images must also be centralized, so the inspection can see them remotely. When the chance of being caught on illegal and unworthy practices is greater, the number of incidents will decrease. 'Gaia is also in favor of animal rights organization.

On Tuesday, animal rights organization Animal Rights with outrageous hidden camera images of animal abuse expired and demanded the immediate closure of Verbist's slaughterhouse. The inspection team is in the slaughterhouse and, according to the spokesman, 'found enough in the infrastructure in combination with the images' to close the slaughterhouse. Further investigation follows. 'The company is being reviewed. Thereafter we look at what needs to be changed to ensure animal welfare. '

In March, a pig slaughterhouse in the Belgian Tielt had a month close after Animal Rights had revealed gross misunderstandings with undercover images. After receiving all sorts of measures, it received a second chance and reopened in April.

In the Netherlands, after the appearance of the images, it was decided that slaughterhouses in our country also receive camera surveillance. Slaughterhouses that do not voluntarily install cameras will be able to make an obligation.