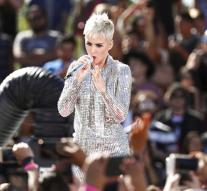 - Katy Perry reached the magic limit of 100 million followers on Twitter on Friday. The pop singer is the first person ever to get this together.

Katy has been active on social media since 2009. In nearly eight years, she has submitted more than 8000 tweets to the world. The day that Perry got the most attention on Twitter was in 2015 when she performed during the Super Bowl break.