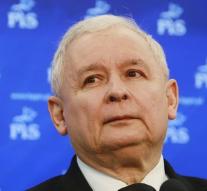 Kaczynski told TV channel TV Trwam that Duda's veto over two parts of the law to reform the Supreme Court and the National Council of Judiciary was a 'very serious mistake' but now emphasis must be placed on how further to go. 'This means that a reform will come, a partial reform will not change anything,' Kaszynski said.

Duda said earlier this week that he will submit his own bill within two months to review the judicial system.