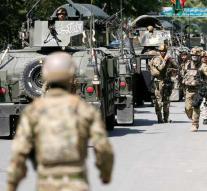 kabul - At least nine people were killed by attacks in the Afghan capital Kabul. At least seventeen people were also injured, the authorities say.

Attackers struck several places in the city. For example, an attacker blew up at a police station in the west of the city. Then armed men opened fire. According to the authorities, at least four civilians and two police officers were killed. Four extremists would also have been killed.

Later explosions sounded in another part of the city, where many companies are located. There would certainly have been three deaths. 'There was a huge explosion. As a result, everyone got panicked ', said a witness. 'We tried to leave the area when we heard an explosion and gunfire. '