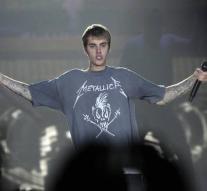 - Justin Bieber's apologies were already a worldwide hit. The music video for Sorry, the charts argued in fourteen countries, proved a success. No other clip was viewed more frequently in recent years through music platform Vevo.

Sorry been viewed over 1.8 billion times over Vevo, which published Thursday its year lists. More than 24 million clicks came from the Netherlands, seen from the list of the ten most viewed in our country Vevo videos. Sorry carries both the international and the Dutch top ten on.

International Justin is followed by Hello Adele, that clip has been viewed more than 1.2 billion times. The Dutch list is the British singer no further than the fourth place. Work From Home from Fifth Harmony and Love Yourself Justin Bieber were often searched.

The Dutch list is one place for an artist from their own country. The boys of B-Brave stand with their hit One Night Stand in tenth place.