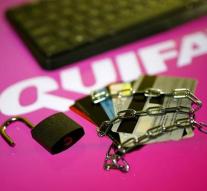 new york (anp/bloomberg) - The US Department of Justice has launched an investigation into the major hacking attack at the Equifax credit bureau. In that cyber attack, hackers gained access to the personal data of 143 million Americans.

Justice is working with the FBI. Other federal services have also been investigating the company. Equifax discovered the hack at the end of July in an internal investigation, but only released the news on September 7th. Cybercriminals were given access to, for example, BSN numbers, credit card details, home addresses and birth dates.

Evidently, Equifax is also being investigated due to a suspicious stock transaction. Equifax's top executives, including the financial director, have sold shares before the news about the data gate was brought out. Maybe they acted with insider knowledge. Equifax denies it. After the cyber attack became known, Equifax's course went down hard.