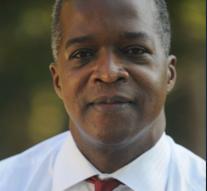 - Justice Curacao is currently engaged in a major search in the house of Emsley Tromp, director of the Central Bank of Curacao and Sint Maarten.

Tromp is suspected of tax evasion and money laundering. He was for many years associated with financial malpractice.

The action led by former Amsterdam prosecutor Saskia de Vries fits the tactics of the prosecution on Curacao called 'subversion' by tackling criminal activities on the island. Justice is referring to activity in the upper world, which wash the underworld figures easier to make money white. Justice aiming the arrows on notaries, brokers, lawyers and- in this case- bankers.

Tromp is already under fire for a while because he Curacao and Sint Maarten Central Bank would not lead to integrity. The raid just makes Curacao a stir.

The action is months of preparation preceded. Ensley Tromp valid for thirty years as one of the most powerful men on Curacao and imagined until recently untouchable.