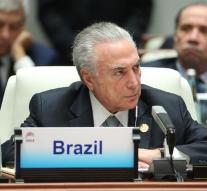 brasilia - The Public Prosecutor in Brazil has accused President Michel Temer of opposing justice. It is up to the Brazilian Lower House to determine whether the president should be in charge of the High Court for accusations of corruption.

The people's representation must vote on it soon.

Temer would have accepted money from the two brothers Batista who lead the huge Brazilian meat company JBS. Both were detained this week. They would have bribed not only the president but also two thousand other politicians. There would be a sound recording on which one of the Temer brothers speaks about bribery. In exchange for money, the president would ensure that the company would benefit.

Temer has always contradicted all allegations.