Home / World / Just in front of elections in Kenya 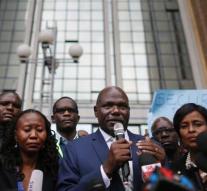 nairobi - Four days before the national elections, the police in Kenya have invaded offices in the opposition parties. According to the Kenyan television, the attacks were because the parties were organizing their own 'vote count'.

However, a spokesman for the main rival of Sitting President Uhuru Kenyatta, Raila Odinga, stated that he did not know the reason for police action.

Counting the votes in Kenya proved a problem in recent elections. In 2013, the electronic voting machines broke down while the winner was announced in 2007 while the countdown was still under way.