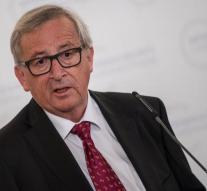 brussels/luxembourg - Countries that do not accept asylum seekers from Greece and Italy, such as Hungary and Slovakia, get a legal procedure on their trousers if it lies with European Commission President Jean-Claude Juncker. 'I am for it', says the Luxemburger against the German weekly Der Spiegel. The day-to-day EU administration will take a decision next week.

Member States undertook to relieve both frontline states in September 2015 by redistributing asylum seekers across Europe. Hungary and Slovakia voted against it at the time. However, the decision is also valid for them, Juncker said. The Czech Republic is also eligible for the penalty bank. That country has only taken over twelve people and wants to let it go.

In principle, a refugee must apply for asylum in the country of arrival, but this so-called Dublin system is considered unworkable since the 2015 migration crisis. Member States are trying to reach agreement on a European asylum system, but the solidarity that this requires is a major obstacle, especially for Eastern European countries. This was again demonstrated on Friday in Luxembourg by EU asylum ministers. The Belgian State Secretary, Theo Francken, spoke of an impasse.