Home / World / Juncker: US can not agree 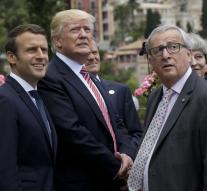 berlin - US President Donald Trump may want the United States to abandon the Paris climate treaty, but that's all but a simple process. That said Jean-Claude Juncker on Wednesday evening during a student meeting in Berlin.

'It will take years for Americans to be under the terms of the agreement,' said the President of the European Commission, which is in the German capital for an international forum. Political leaders discuss there about the future of Europe on Thursday.

According to Juncker, Trump can think he can arrange the farewell with a pencil region, 'but that's because he does not know the details. It's up to Europe to say that's just not going to happen. ''