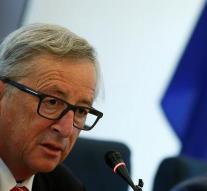 brussels - Turkey is not in a position to join the EU in the short term. As the country re-threads in addition to the death penalty, the EU will immediately stop the negotiations on accession. Said Jean-Claude Juncker, President of the European Commission Monday on radio station France 2.

Minister Recep Tayyip Erdogan said last week in an interview with television channel al-Jazeera following the failed coup that if the Turkish parliament wants it, he will not block reinstatement of the death penalty, even if it costs the EU membership. The EU does not accept the death penalty.