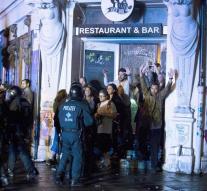 brussels - Jean-Claude Juncker criticizes the arrest of the police in the riots around the G20 conference in Hamburg 'unfair and incomprehensible.' According to the President of the European Commission, 'every police officer has put his life at risk.'

'It deserves recognition, not critical,' the Luxembourgian said in a statement Monday. 'I want to thank the Hamburg and federal police for their work during the G20 summit. The inhabitants of Hamburg who helped Sunday to clean up the city also deserve our fullest respect and appreciation: Hamburg at its best! '

From thursday to sunday, there were heavy riots in the city because of the summit of the leaders of the twenty economic powers on Friday and Saturday. Nearly five hundred agents were injured. Over four hundred riders were arrested, of whom there were still 225.