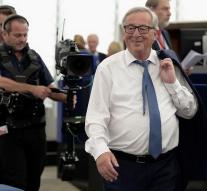 - "Dutch EU parliamentarians respond variably to the speech by Jean-Claude Juncker held Wednesday. In his annual \"State of the Union 'the President of the European Commission advocated including for more defense cooperation."

"Esther de Lange (CDA) joined Juncker's concerns about the lack of EU decisiveness and expressed support for his emphasis on safety. It supports proposals for better protection of external borders and cooperation in the field of defense."

"Hans van Baalen (VVD) found that Juncker spoke for an hour about,, this and that. ',, A heated mash without priorities. He was vague on refugees, brexit and Turkey and gratuitous on defense. '' The Liberal suggested Vice President Frans Timmermans to write the next State of the Union."

"Bas Eickhout (GL) was positive on the spur of Juncker to quickly ratify the climate treaty. But he lacked conviction and self-reflection on the power of Brussels grants according to him, to the business, such as the automotive industry."

"The PvdA was particularly positive about the proposed doubling of the investment and Junckers call to apply the fiscal rules with common sense. Delegation Paul Tang missed it,, urgency '' in the speech.\n  \n  \n   advertisement"

"The SP was not impressed.,, Who listened to Juncker, heard a plea for more Brussels '' said Dennis de Jong SP (SP). Centralization of power is his real theme. This is completely at odds with the wishes of ordinary people. '' The Christian Union said that Juncker,, a mess '' makes the budget agreements. EU parliamentarian Peter van Daalen said that,, great new plans that keep stabbing halfway '' the credibility of the EU is doing any good."

"The PVV was as expected very negative. Leader Marcel de Graaff reiterated its call not allow more migrants to the EU and those who send all his way. He further pleaded for,, de-Islamisation 'of Europe."