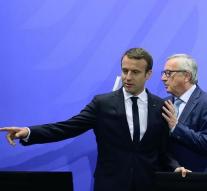 brussels - The President of the European Commission Jean-Claude Juncker greeted the speech of French President Emmanuel Macron with great agreement on the future of Europe. He thanked him for the support of the EU institutions in Brussels. 'A very European speech from my friend', Juncker responded via Twitter. 'Europe can use good courage.'

Juncker acknowledged that everyone benefits from a stronger and better united Europe. 'What we need now is a roadmap to work for a union with 27. We must discuss all ideas in open mind and make a decision by May 2019,' said the President of the Commission with a reference to Britain's retirement in March of that year. Due to the brexit, 27 countries remain in the EU.

Juncker's chief executive Martin Selmayr sees great political resemblance between Macron and his boss. 'Europe has rarely seen so many similar positions with a French president and a Commission President. Any nuances, yes. But also a lot in common. 'Both Macron and Juncker argue among other things for a finance minister in the euro area.