Home / World / Juncker against parliamentarians: 'You are ridiculous' 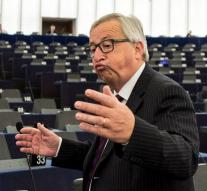 strasbourg - The European Parliament is 'not serious.' 'You are ridiculous,' said a furious President of the European Commission Jean-Claude Juncker on Tuesday morning at the Strasbourg plenary session. Nearly thirty parliamentarians had appeared before a session with Prime Minister Joseph Muscat, about the Malta-based EU Presidency.

'If Mrs Merkel or Mr. Macron had been, we would have had a full house', Juncker read the parliament. 'Parliament should also respect the small Member States. I will never participate in such a kind of session, 'brieste de Luxemburger.

The President of Parliament, Antonio Tajani, tapped Juncker. 'Do you want to show more respect. You may criticize but the European Commission does not control parliament, but vice versa. 'After Juncker called' you're ridiculous, 'Tajani asked him to' change 'tone of tone. 'We are not ridiculous. '