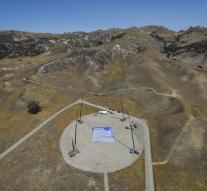 california - It has never seen before: a jump from a plane at almost 8 kilometers height without a parachute. US skydiver Luke Aikins (42) stands today for the almost impossible task to get back down in one piece. He thus defies the laws of physics.

Many ventured all the so-called free fall, including the Austrian Felix Baumgartner who came to a height of 39 kilometers. With parachute that is. Aikins also made for about 18 000 times a parachute jump. Now he wants to write in the California desert history by becoming the first ever jump without parachute.

. The jump will take about two minutes at a maximum speed of 200 kilometers. Aikins has only a few tools in his pocket, including an oxygen mask, a GPS system and a headset to receive instructions. The last two accessories are vital to find the special grid of 30 by 30 meters which should catch him.


Professor Bert Blocken aerodynamics of the Eindhoven University of Technology states that Aikins actually does everything previous record hunters parachute just detest. To illustrate what he calls thick pleated suit and the horizontal 'eagle' position, the arms and legs are spread. 'The friction that occurs, it creates maximum air resistance so that the falling speed remains relatively low,' says Blocken.

According to the physicist- known for his research into the suction of tracking cars at cyclists- Atkins' biggest opponent the wind. 'The crosswind pushes him to the edge of the network, so he should try as much as possible to keep the center. 'The attempt is therefore depends on timing. 'About five seconds before landing, he must submit. This can, for example, to stretch by an arm so that it ends up in the network with his back. That is not elastic so that it will not be catapulted. '

Completely unscathed Aikins will not come from suspects Blocken. 'Chances are that with his pack along the edge of the network scours. Without this special suit he would certainly second-degree burns. 'The stuntman himself there confident witness bold statements following his successful test jump earlier this week. 'I want to show that we can do things that everyone loves to impossible. '

Luke Aikins is freely freefalling which many people shudder. Critics of skydiving are already talking about a death leap.

Depending on weather conditions Aikins will be around 02. 00 pm Dutch time to make the jump.