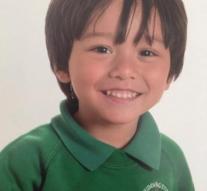 - 'Have you heard of him? Does anyone know anything? 'If someone is looking for a Barcelona trip, it's the seven year old boy Julian Cadman from Australian Sydney. He is still missing after the attack.

The family does not know where he is, and whether he is injured. The father can land in Barcelona every moment to look for his son.

In Barcelona and throughout Spain, his photos are distributed online, with the request to seek him.

The boy walked with his mother on the Ramblas when the white bus was making a massacre. During the attack they were divorced. His mother is now in critical condition at the hospital. They were together in Barcelona for a cousin's wedding. His father, Andrew Cadman, says he has spoken the two for a couple of hours before. He was on the plane yesterday, but the journey takes 24 hours.

Family members spread their photo online so people can search for Julian. 'If you also know someone in the neighborhood to share this, please do that,' said his godfather Colin Baxter on Facebook.

Premier Malcolm Turnbull called on Australians to pray for him- and says his thoughts are with the family. 'I think we all have to quit a prayer for this little boy in a quiet moment. All parents catch the fear that the father and all his family go through while they are on their way to find him in Barcelona, ​​'said Turnbull.