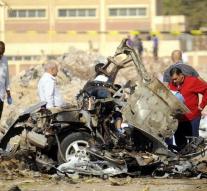 - A judge who sentenced the deposed Egyptian President Mohamed Mursi in 2015, is Friday escaped death. One in a car parked in Cairo hidden bomb exploded when Judge Ahmed Aboul Fotouh drove past, but no one was injured, said the Ministry of Interior.

The bomb exploded in Nasr City in eastern Cairo. The responsibility has not yet been claimed.

Fotouh was part of a panel of three judges Mursi in April 2015 sentenced to twenty years in prison. The court found him guilty of inciting violence in connection with the death of ten people in clashes with security forces in December 2012.

Mursi belonged to the Muslim Brotherhood, of which many members were arrested after the military coup in 2013 and sentenced to long prison terms or to death.