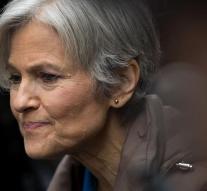 - Michigan stop the recount of votes in the US presidential election. A federal judge has decided that presidential candidate Jill Stein of the Green Party is not a victim and therefore has no right to request the recount.

Stein took Michigan just 1 percent of the vote. Stein's lawyer says that has not yet been decided whether an appeal against the ruling.

The presidential candidate of the Green Party had next Michigan also requested a recount in Wisconsin and Pennsylvania, as there were reports about fraud hacked electronic voting machines. In all three states Donald Trump was the surprise winner. In Wisconsin the votes already counted again. In Pennsylvania wants Stein through the federal courts still force a recount.