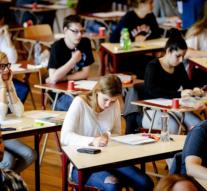 utrecht - An eighteen-year-old VWO scholar from Breda failed to change her test of French by the judge. She had not achieved too many points for French, thus losing her final exam.

But the College for Tests and Exams (CvTE) does not have to change the result for the French exam, such a particular defendant in Utrecht.

The French key was under fire because there were several mistakes. The CvTE acknowledged that and adapted the French exam for everyone. But that was according to the girl's lawyer too late and it was still not a good calculation of the scores. For the scholar, the adjustment was just insufficient. She challenged the college before the court to change the outcome of her exam.

The girl wanted to get her diploma because she could go to college in September.