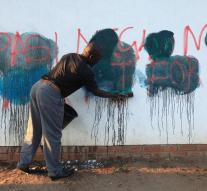 harare - The demonstration ban decreed the Zimbabwean police is illegal. That determined the court of the country in southern Africa on Wednesday.

Opposition members, who complained that the ban violated their rights, had asked the court to settle the issue. The court gave them equal and suspended the ban for a week.

Police banned Thursday for two weeks all demonstrations in the capital, Harare. The government wanted to prevent the protests could degenerate again into violence.


The Zimbabwean population, the economic downturn that lasts for decades, fed up and stirs louder. A demonstration of the opposition was almost two weeks ago out of hand when the police with tear gas trying to disperse the demonstrators.