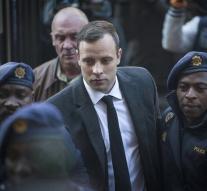 johannesburg - A South African court on Friday not authorize the prosecution to reduce the sentence of former Olympic runner Oscar Pistorius in action.

Judge Thokolize Masipa said the OM it is not able to convince that another court would come to a different punishment. She explained the 'blade runner' in June six years in prison for manslaughter for his friend Reeva Steenkamp in 2013. The prosecution thought the punishment too low.