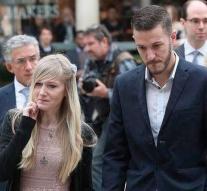 london - The British court will pronounce on Wednesday afternoon how the deadly baby Charlie Gard may die. It is the final confrontation in a legal battle that has raised the emotions high. The almost one year old boy suffers from a rare genetic disease, which is among other things funest for muscles and brains.

The parents of Charlie have in vain a legal battle to have their child undergo an experimental treatment in the United States. On Monday they gave that battle. They find that Charlie's condition has now gone too far.

Chris Gard and Connie Yates want to take Charlie home to let him die there, but according to their lawyer, the hospital threw up obstacles. The hospital showed that the child is artificially breathing and that this is not possible at home.

Charlie Gard is born on August 4th. He would then be one year. But his parents think he will not get that.