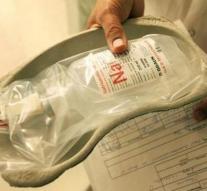 alkmaar - The district court judge in Alkmaar decided on Friday whether a 12-year cancer patient should be treated further for his illness after his will.

The child's father finds out and has put his claim to the court. He spent two weeks in court against the foundation of the Youth \u0026 amp; Family Protectors, who supervises the child. The treatment took place behind closed doors.

The boy was previously irradiated because of a brain tumor and had to start chemotherapy in March. He does not want to, and that is confirmed by a psychiatrist. He explained to him, after research.

The father is not sure at all that his child does not want to live anymore. He was divorced from the mother who saw little salvation in a medical course and had a preference for alternative treatment. The boy was also placed under supervision for that reason.

The summons found that physicians have stated that his chances of healing without further treatment are fifty fifty. In a follow-up treatment, his survival rate is 75 to 80 percent.