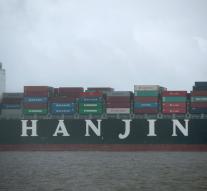 seoul - The ailing Korean shipowner Hanjin Shipping is probably on sale. The judge hearing the application for deferral of the container giant, is considering to initiate the sales process. He has previously summoned all the officials who oversee the last time at the company.

The judge thinks it is better that there is searched for a restart as soon as possible. The sales plan is of course dependent on the demand from the market, but according to one analyst, there would be interest in a takeover by the Danish shipping and oil group A. P. Moller-Maersk and the Korean competitor Hyundai Merchant Marine.

Hanjin Shipping asked late last month deferral on. Then arose worldwide problems with the delivery of containers. Many ports refused to unload ships from Hanjin, because they were afraid not to get paid for their work. In Rotterdam this caused problems.