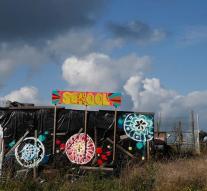 - A French judge confirmed on Tuesday that the refugee camp must be evacuated in Calais. The case was brought by various charity organizations. In the camp still stay thousands of refugees in appalling conditions.

According to the judge's decision to clear the 'jungle' not contrary to the prohibition of inhuman and degrading treatment of individuals. The evacuation would just 'put an end to such treatment, which is now experiencing the refugees. '

The French government will this year put an end to the reception of refugees in the jumble of tents and shacks near the port of Calais.